This weeks task for the Life Circle was to complete the Wheel of Life and rate ourselves on each of the different areas.
Since I did this last year a number of areas have improved while others have remained the same. There wheels definitely skew-whiffed and there are obvious areas I need to work on so that it is more balanced. 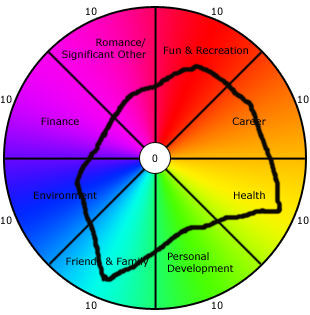 My son and I managed to do some of the things that I wanted to try and do, like going to the cinema and also geocaching, which we did once last year on a lovely Saturday morning wandering around parts of Ham Hill that we'd not ventured to before and also on New Year's Eve with his cousin finding all four of the caches that we set out to search for, including one that we'd failed to find twice before.

I also managed to get to Bristol every other week from the start of November through to the week before Christmas for burlesque classes and also the Christmas Cabaret where I went out and performed the routine that I've been developing in front of about 100 people. I'm going to be going to the intermediate class that the school runs through January as they are teaching fan dance which is something that I want to learn for my next routine.

This week I'm going to be returning to work as Jenna and so some of the stresses and frustrations that I've had to deal with should fade a bit. The threat of redundancy is still there but that is still a good 6 months away before that could become a reality. If that does materialise then having completed 6 months of transition then I'm confident that with my experience and redundancy package I should be able to find another position before we start to struggle.
There is also the chance that there are positions going at our companies site in Bristol which I might be qualified for and that is something that I've been looking at for a little while as it will give the family a bit of time and space to get used to my having started to transition. It also would give me the chance to develop my burlesque further as I'd be there during the week.

Health-wise I'm working on my fitness and also finally resolving my gender dysphoria.

As far as friends and family are concerned a lot of things have happened since I did the Wheel of Life last time. My in-laws are aware of my plans and I know where I stand with them. Everyone at work and the majority of people at church also know. The reactions of people at work, if they've said anything, have been of surprise (nobody saw this coming), concern for my family and that I'm going to need to get a good pair of hair straighteners.
I turned up as Jenna at my best male friends home just before Christmas and we talked for about 2 hours about things. I received a message from him the other day wishing me good luck for when I return to work. My neighbours are aware of what is happening, the ones that I've told face to face have been shocked but their reactions have been positive

So that's my line drawn in the sand. Life is certainly not balanced at the moment and so other than all the other challenges I know that I'm going to face this year, making progress on getting life more balanced is something that I plan to do through the Life Circle.
Posted by Jenna at 08:38