The week so far - Saturday

This post is a bit late but I have an excuse, I didn't get to bed until 7am Sunday morning. The last time I pulled an all-nighter  I was in my late teens early 20s.

Saturday was the best day I've had for a while. It started with me getting my hair done by L. This time was a bit different to normal as although I'm used to going on Saturday mornings this was the first time that I had gone as Jenna when the salon was going to be fully open and there were going to be other clients there. It had to be done at some point though, I can't keep turning up on a Thursday night when it is just me there.

I got ready, chose a sensible outfit consisting of a pair of jeans, boots and a multi-coloured tunic style dress.

Make-up sorted, purse, diary, phone and keys in my bag. Coat on and I was out the door by 8am. My appointment wasn't for a while but I needed to fill the car up with petrol and post a couple of letters. Besides the neighbours still aren't aware of what is happening, that should change after Christmas as we plan to speak to a few of the neighbours and drop notes through the doors of the rest.

My appointment went without a hitch. I'd been planning on getting my hair styled for Saturday night but L surprised me by asking if I wanted her to straighten it. We'd been planning on doing that as my hair goes a bit frizzy and curly and needs to be controlled. I opted for this as it means that it will be easier to manage when I go back to work.

After an hour and a half in the salon, a large part being spent out back having chemicals applied to my hair and then getting it washed, I was ready to hit the streets with my new, much straighter, hairstyle. It was great to be able to go to the salon as Jenna.

Back home but this time through the back door as it was more likely there would be neighbours around by now. There was always the chance that I could have bumped in to someone while getting out of the car but that was a risk I had to take. Not that it would be an issue, it would have meant explaining things to them.

I had a few hours to spare before I had to head out again and I didn't plan on removing my make-up and reapplying it just yet so I had a bit of lunch and pottered around. This did mean that my son finally got to see me as Jenna in the flesh. He avoided looking at me as much as possible as he's still not comfortable with  the idea.

Eventually both he and his mum went out to out church's Christingle service. Just before they did I removed my make-up and after saying goodbye I went back upstairs to get ready to go out.

I kept my make-up similar to what I'd worn in the morning but went for a much brighter lipstick as it would look better when I was on stage in front of nearly one hundred people. Did I say on stage? Yes, that's right. Last Saturday evening I finally performed the burlesque routine that I've been developing in front of an audience. It was the Pink Kitten Christmas Cabaret and I was performing as my alter-ego Ms Jenna Von Risque.

With my make-up reapplied I slipped into a black and red shift dress that I had planned to wear as I was expecting to go out for a couple of drinks with the rest of the girls after the show before returning home. Ha, best laid plans and all that.

The journey to Bristol was uneventful, getting through the city was more problematic and I eventually managed to get to the venue, having parked my car a good 5 minutes in a back street and then walked on my own through an area that did make me feel a bit uncomfortable and which I'd have to walk back through at the end of the night.

I walked into the room we were using to get changed with about 10 minutes to spare to the time we were all expected to be there.

It didn't take long to touch up my make-up and getting into my drummer girl costume. I was going to be performing my routine to a combination of an instrumental version of The Little Drummer Boy and the David Bowie/Bing Crosby version. I'd practiced it and felt confident that I knew exactly what I needed to do and at what points I needed to have it done by.

Its amazing the effect that nerves can have, during my run through I found that I'd finished the first part of my routine with quite a bit of time to spare. Either there was something wrong with the music system and the track was playing too slowly, possible as there were a few hiccups with the sound system, or I was doing something wrong. I didn't get the chance to go over the routine again and had to hope that when it came to the life performance everything would work out fine.

The show got started and I was privileged to watch a lot of my fellow students performing their routines. All of them had performed in public before, I think there was only one other person who was performing a sole routine for the first time.

Every single one of the performers was fabulous. The audience whooped, whistled and clapped enthusiastically. None more so than the bunch of rowdy Pink Kitten performers that were stood at the back of the venue.

Eventually though it came time for my routine. I grabbed my drum and drumstick and after the best introduction I'm likely to get I strode out in front of nearly 100 people.

To do what I did took a lot of courage, by nature I am very shy and being in front of that many people, performing, while they all watch me is something I never would have dreamed of, but I did it. I actually strode around the stage, bumped and grinded, did some salsa moves, peeled off gloves 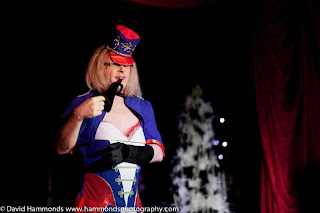 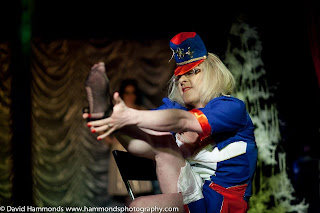 and finished with a showgirl pose.

I walked off that stage and felt amazing. The girls whooped and clapped and hollered at the back. I'm sure i heard someone shout "Get them off" but that might have been the audience.

Did the routine go to plan? Not at all. Nerves got the better of me and I found myself with large gaps at the end of sections where I had to improvise, once by doing a number of additional bumps and grinds. The second time by going into a prayer like pose for a lot longer than I expected. One of the girls thought that I was doing that because I'd forgotten what I was going to do next. Nope, I was just waiting for the music to catch up so that I could hit the last part of the routine.

Every single act was fabulous. Each had moments that were so memorable. Eventually the show drew to a close and it was time to pack up and leave.

I'd been planning on driving home but at the last minute was persuaded to go to an after show party at one of the other girl's homes. She had a spare room so I could crash there.

Her home is totally amazing, its so beautiful and has everything you could possibly want. That includes a room that is fitted out for karaoke. I have only ever done karaoke once. I managed to hold out for a number of hours but eventually succumbed and did my rendition of Laurel and Hardy's Trail of the Lonesome Pine.

After that I managed at least one more song which was selected for me. Maybe at some point in the future once I've had a bit of speech therapy I might be tempted to get up and do a bit more karaoke.

Eventually it was 7am and with the party over those of us who were staying made our way to our rooms and a few hours of sleep.

My journey home was a bit more eventful than the journey there as the outfit I'd chosen to wear back was lacking a certain something. I'd chosen a tunic top and cardigan, however the top was rather too short and I only had stockings to wear. I end up wearing my coat all the way home in the car. It wouldn't have been too much of an issue if I'd not had to stop off and fill up with petrol, fortunately I could pay at the pump. I also had to get into the house in the middle of the afternoon and so once again used the back entrance while praying that I didn't bump into any neighbours. I certainly learned that particular outfit requires trousers, leggings or very thick tights when I wear it next time. Probably trousers.

Saturday was a brilliant day. I managed my first public performance, now I just need to work on another routine to perform. I've got an idea for my next one and it will be a fan dance of some kind. I also know what the venue is like now and so can work my routine to fit in with that. If I'm really lucky I'll have it developed (maybe even with a new costume) for February when the next show is planned. We'll see. I've already started thinking about a couple of other costume and routine ideas, one might even be for next year's Christmas show.


I've no idea what next year will bring but I do know that now I've performed once I certainly intend to do it again. I doubt the rest of the girls would let me get away without performing again anyway.


Stay tuned for more performances by probably the only Transgender Burlesque performer in South West England.