Recently LittlePuffin over at Muddling on posted some pictures of her garden, the latest ones are here.

Before I went into hospital I made a big effort to tidy up our gardens, partly so I could enjoy sitting in the back garden during the 3 month heat wave we were supposed to experience over the summer and partly because we were moaned at about the overgrown lavatera and brambles that that took up a large corner of our front garden. The front garden was also tidied up in order to get rid of the hedge that had been there since before we went in and to replace in with a fence around the front of our property. 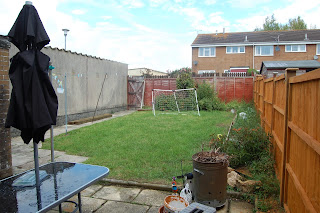 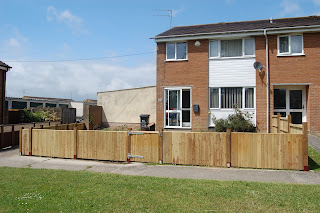 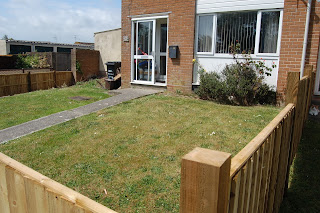 Our house being an end terrace we are very lucky that we have a lot more land than the other houses around us. Most of our neigbours front gardens are as wide as their houses.

I'm not really a gardener, I can cut grass, do a bit of weeding and planting but that's about it. That is going to have to change if my plans for the future happen.

In the meantime there are things that I want to do with our gardens to make them low maintenance but also something that we can enjoy.

In the back garden the border that runs from the small patio area to the back of the garden is going to have anything growing in it killed off, a suitable membrane put down and then pebbles put on top of it. We're then going to put several large planters along the border. The border running along the back of the garden will eventually disappear and a reasonable size summer house or garden shed put there. The shed that is near the house will then be demolished and paving slabs put down so that we have a bit more space close to the house. In a couple of years when my son leaves home a small lawn in the back garden will be enough for us.

The front garden is going to have a membrane put down along the fence panels on the one side where the hedge used to be, pebbles will be put down on top of that. Replacing all or part of the garden with pebbles is something that a number of our neighbours have done, we're happy to just do part of it.

In the area where the lavatera and brambles were we plan to dig it over and put grass seed down, at least as far as the brick wall where there are steps leading up to the garages alongside our back garden. That area will be leveled off and have a raised area that will be covered with more pebbles.

Its definitely not something that we will be doing quickly. Getting rid of the plants and weeds in the borders will take a little while. Cutting down and killing off the remnants of the hedge and lavatera will also take time and a lot of physical effort, something I'm far from capable of at the moment. Its something to plan for, and when finished will hopefully make our garden look really nice and something we are happy to enjoy.

And now the fourth of my playlists:

The Planets - Love In Slow Motion

The Mediaeval Baebes - The Sour Grove