This week saw another major milestone in my recovery. Having completed my 2 weeks of house arrest I was finally released on Tuesday.

After spending the two weeks at home and not able to really go anywhere it was lovely to be able to get out for a short while.

Up early, get dilation out of the way, shower, dress (jeans, camisole top and light sweater) and then for the first time since I returned home from Brighton on went some make-up. Slip on some trainers and a coat and it was time to head out. Of course I'm not able to drive at the moment and so I had to rely on my wife to drive me to the large Boots store across town (this is a pharmacy chain in the UK).

From next week I stop using Viadene when I douche. Although I can use warm water from that point on occasionally I'll need to douche with something else and so I wanted to pick up something called Femfresh. As I also douche while lying on the bed at the moment, because I've not tried it while sitting in the bath, I needed some absorbent mats that would catch the liquid and not soak everything. Boots had a couple of packs which I bought.

With that errand out of the way we then headed to one of our local supermarkets to do some shopping. Biscuits were high on the list of things I wanted so that I can offer them to people when they come to visit.

Having not been out for a while, and although I've been moving around at home, it was strange being out and about again and I was walking very gingerly. By the time we'd finished shopping in the supermarket all I wanted to do was get back to the car and go home. Things were starting to ache and I wanted to get off my feet, take a couple of painkillers and have a rest.

One thing I did note when we were in the car and that was that it was a lot easier to sit than it had been the last time I'd been in a vehicle which was for my return from Brighton. As much as M's car's seats were in a great position, and were reasonably comfortable, I did find myself fidgeting and moving my legs around a fair bit. It looks like I'm healing enough.

Since Tuesday I've not bothered to go out, I've not felt the need. I do need to pop to the pharmacy to pick up some Movicol and hormones but that can wait until next week. I've got to go to my doctors to ask for something to help with the scars from my surgery (Kelo-cote or Bio-oil) and also for dilating after my current lubricant runs out (Sylk).

Thursday saw me receive my first visitor since I've come home. S, from the burlesque troupe came round. She brought with her a card signed by everyone and also a box of cupcakes, each one named after a member of the troupe. I'm sitting here staring at the last one as I type this. Of the 8 she brought I've eaten 6 of them in the space of 24 hours, they are that delicious and irresistible. Cupcakes with a butter-cream topping and different fillings. Yummy!! Mine is the one on the bottom left of the picture and called Mira D' Glass. 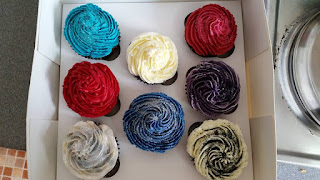 I have another friend coming to visit on Saturday and then next week I'm looking to arrange for other friends to pop in and visit while Rhys and Tracey go away for a few days. Ostensibly this is so that Rhys can spend Friday morning at Silverstone race track being driven around in a Ferrari, but hopefully with the opportunity for him to see his Aunt who lives in Northampton for a couple of hours and then to spend a couple of days at his other Aunt who lives in the Cotswolds before returning home on the Sunday. I'll be stocking up on a few simple things for me to cook over those days, the sort of things that I can put on to cook and then leave to their own devices if need be. The exception being duck breasts as I found some redcurrant sauce in the fridge that hadn't been opened and decided that I was going to cook duck breasts in a redcurrant sauce.

The last couple of days I've had some stinging pains. Now pains are something to be expected as everything heals. While I was washing down the suture lines and everything prior to dilating using the Hibiscrub solution I noticed there were what looked like white blisters in the area of the clitoris. Being unsure whether that was normal or not I contacted Brighton and asked for the nurse in charge of all the GRS patients to ring me back.

When she did we had a nice chat about how I was doing and then got down to the business of the white objects I spotted. There were a couple of things that they could be, one of which was Thrush, something that the discharge notes says is a possibility. Without seeing what I was describing it wouldn't be possible to say for certain what it was and so I was told to take some pictures and to email them through.

Now this is where my wife comes is. Taking pictures of that area is not going to be easy unless you have two pairs of hands. As I sadly only have one pair I had to rope her in. Digging out my best camera we headed to the bedroom and, having positioned myself in my most sexy and sultry position with my legs wide apart (there is no way on Earth I will ever look sexy and sultry like that) she started snapping away.

I have to say that transition has led to occasions that I would never have dreamed about. Discussing my breasts with my Mum was bizarre but having my wife take pictures of my genitals really has to be the strangest.

The pictures were emailed to Brighton late evening, this morning I received a call from them. They'd looked at them and everything seems to be healing well, I might have some granulation tissue at some point but the white blisters have turned out to be something called fluffy tissue. To get rid of it all I need to do is to wipe away at it with warm water and Hibiscrub. Phew, that's a relief.

So with that I'm going to go and enjoy my last cupcake, relax for a bit and then later on go and remove the plasters that were put on to protect the suture lines for my breast implants. Something that I should have done about 10 days after my surgery, but wasn't told about until yesterday.

Never let anyone tell you that we do any of this because we want and easy life because its certainly not that at this stage. Although its certainly a lot better than living with dysphoria and pretending to be the gender you never should have been.

And to while those minutes away when you've nothing better to do some music.