Hooker (and not the rugby kind)

Last Saturday I went to the latest Pink Kitten showcase. For once I wasn't performing but sitting in the audience and watching the rest of the girls perform.

Since it was one of those rare occasions when I go out for the evenings I spent most of the day trying to figure out whether I should go with a tunic style dress and leggings or my short purple dress. Despite the fact that I'd been leaning towards the more informal outfit I ended up going with the purple dress.

After sorting out my hair and make-up and slipping into my outfit I took one look at myself in the mirror and thought "OMG, I look like a hooker". Now that probably wouldn't have been a bad idea but the area where the studio is located, although really close to the city centre, is not far from some rough areas. Also as I wasn't sure whether I'd be able to get into the building when I arrived there was the possibility that I'd be stood around outside on the street corner waiting for them to open up. Oh well, what's the worst that could happen. Its not like I'd dozens of guys walk past me while I was waiting.

Er, well yes actually or more accurately 4 guys as I was waiting outside, another half dozen as I walked back to my car rather that stand around outside and another bunch as I was getting back into my car and sitting in it waiting. Typical.

On the plus side I did notice one guy checking me out as I was getting back into the car.

On the plus plus side I wore a pair of stilettos to go somewhere for the first time and I didn't break a leg while doing so. You never know I just might get used to wearing drop dead sexy shoes at some point. 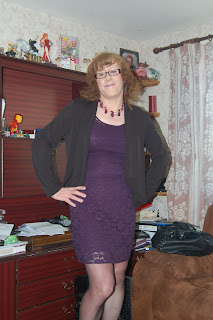 You can't see the shoes in this shot but they are about a 3 inch heel. In the end I decided not to wear the jacket and wore something a bit longer.

Eventually I managed to get into the venue, there had been a bit of a delay due to some technical problems and the final rehearsals taking a bit longer than planned.

As usual the show was a mix of burlesque and pole dancing. One of the Pink Kitten teachers that runs hula hoop classes performed and her act was amazing. In fact all of the acts were superb. L, who I've known pretty much since I started burlesque and have worked with a number of times in the past during classes and when preparing for shows and performances, performed a truly amazing routine based on a robot. I'm so glad that I got to see her performed as its something she's been working on for a while.

It was a change to be in the audience and not back stage or on stage. However, it did make me keen to develop some more routines and to be up in front of the audience next time. I'm not sure that I'll have something ready for the next show which is in August I believe but I will have something ready for the Halloween show. With a bit of luck I'll even be fresh back from my first paying gig by then.

Whatever, happens I do know that I wont be wearing a dress or skirt that short to go to places where I might have to hang around on a street corner in future.