Fans for the memories

On Friday I went to Sherborne and had a full body wax, eyebrow wax and eye lash tint. It has been nearly a year since I saw Amz so we had lots to chat about while she worked her magic on my body and eyes. I filled her in on everything that has been happening with me and found out what has been happening in her life.

In the afternoon I paid a visit to M who is another beauty therapist but who does electrolysis and has experience of treating transsexuals.

Saturday was a nice enough day. After doing a bit of shopping and dropping my son off at Messy Church I headed to Mere and a hair appointment. I'd arranged with Lou to have my hair done because I was going to be performing at the Pink Kitten Love is in the Air student showcase.

Arriving in Mere I was stopped by a guy and his family in the car park who asked me how to get back to the A303 road. It was a short conversation but it went smoothly with no indication that he, his wife or children thought anything might be amiss. A real confidence booster.

My hair appointment went well and Lou worked her magic getting my hair into an updo with lots and lots of curls pinned at the back.

The rest of the morning and afternoon passed uneventfully. Eventually though it was time to head to Bristol. The drive up passed quickly and before I knew it I was parked outside the Pink Kitten studio.

There were a few other people there and a lot of the setting up had already been done. We had to wait a while for some of people to vacate another room which we were going to use as a dressing room but by 7pm they were gone and we'd moved all of our things into the room.

There's a lot goes on in order for a show like ours to go off successfully, everyone pitches in and does what is needed, all of us performers help each other in whatever way is needed so that we are ready to go out on stage and perform.

The opening act was a troupe routine which 8 of us performed. The theme was birds and bees with half the troupe being birds and the other half bees. I was one of the bees.
Due to circumstances we'd never had all four bees together to rehearse as a group. Even so the entire routine went down really well, with at least one part of our routine making us look more like bees than it would have done if we'd been able to rehearse together.

I'm so lucky that I get to perform with really talented women. Each bringing something different to their performances and to the shows. On Saturday there was a wide variety of performances covering burlesque, pole dancing, combinations of the two and even an aerial hammock routine. Unfortunately I didn't get to see much of the other girls routines as I was in the dressing room waiting to go on, I'd been put as tenth act, second after the interval. At least it meant that I got to see the one act that I didn't want to miss.

When the time came for me to perform I found that I wasn't as nervous as I'd expected to me. In fact I was fairly calm. I got ready, my music started to play and I was out there. I hit that first pose and ... well see for yourselves.


It wasn't perfect, I didn't quite get some things spot on but I was able to improvise at those points which was the important thing. It was also something I'd not have thought I'd have been able to do the last time I performed.

Throughout my routine I tried to engage with the audience through eye contact and acknowledging the other girls who were watching from the audience. It seemed to go down well.

After the show one woman came up to me and told me that she'd enjoyed my routine. As we were tidying up 3 women that had been in the front row came up to me and said that they'd enjoyed the routine too, one of them even gave me a hug. By the time I'd come off stage I was on such a high that I didn't really come down from it until I got home and headed for bed at about 1am.

I've had quite a bit of feedback from other since and the one thing that they all seem to highlight is my smile, the way I engage with the audience has also been pointed out.

I had such a wonderful time performing that I'm already starting to work on my next routine, it will be another fan dance but this time either using hand fans or large silk fans, I'm not sure which yet. Whichever it is there's one thing that is for certain. I'm going to thoroughly enjoy it and will be smiling throughout it.

To finish here's a couple of pictures of me in my Birds and Bees and True Love costumes. 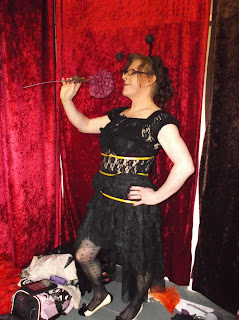 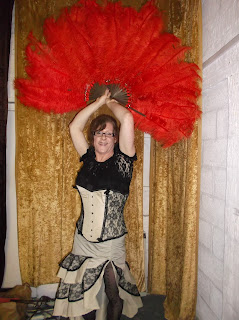