The lovely Cass included me in the group of bloggers to receive the One Lovely Blog Award. Thanks Cass x 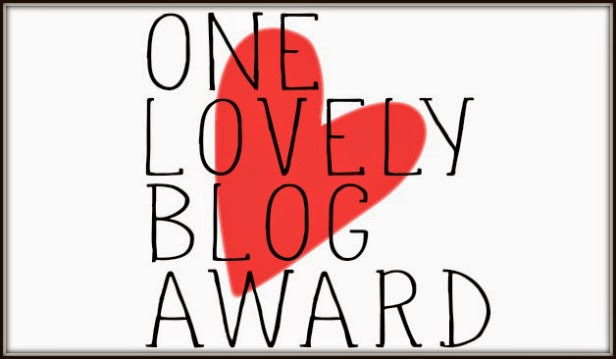 So without further ado, and having completed rules 1 2 and 5 (I've been following Cass for some time), my seven facts.


1. I love to swim but learning to swim almost killed me
As much as I enjoy swimming I don't do it anywhere near enough. Most of the swimming that I've done during the past few years has been part of training for some event or another. I've rarely swum just for the pleasure of it.
When I was at primary school we were taken to the local swimming baths to have lessons. Most of the primary schools where we live do something similar.
After learning the basics and getting to the point where we could swim a width of the pool we finally told that we'd be swimming a length of the pool. If we got into difficulty then one of the instructors has a large pole with a hoop on the end that we could grab hold of. To get into the water we would have to jump in, at the deep end.
One after another my friends jumped in and began to swim, then it was my turn.
I stepped up to the edge of the pool and leaped into the pool. Down I plunged until my head was under the water but rather than coming back up I seemed to be suspended in the water. I could feel my breath beginning to run out and so wanted to get back to the surface but it was so far away. Well it felt far away. Suddenly something loomed through the water and I grabbed at the large hoop that the instructor was holding out for me to grab. Grasping it I was pulled to the surface, I gasped for air and then having composed myself, let go of the hoop and struck out for the shallow end.
Although I could have almost drowned that day, from then onwards I never had any fear of the water and took every opportunity that I was given to swim while in school.

2. I'm a qualified BSAC Sports Diver
At University I did the usual round of groups during the Freshers Fayre. Lots of different groups and activities but nothing really took my fancy until I came across the diving club. Here was something I'd not had the chance to do before and who knew if I'd have the chance in the future. I signed up immediately and for the next 3 years I learned both the theory of diving as well as the practical skills needed to dive safely both in a pool and in open water.
It was so much fun. I dived quarries, lochs and the sea. From the shore and from boats. Just pottering around the seabed and also diving on wrecks.
Throughout my time at Uni I learned everything I needed to know, and demonstrated the skills and knowledge so that by the time I graduated from my course I was also a qualified sports diver with the British Sub Aqua Club. I still have my qualification book at home, although my skills are rusty and I've not dived in over 20 years.
There's a chance that I might have to go to Australia next year for work. If that's the case then I'm going to be looking to get my diving skills up to scratch and if I am really lucky might managed to sneak a trip up to the Great Barrier Reef.

3. I was almost an officer in the Royal Navy
When I was younger I joined the Royal Naval Reserve as an Officer Candidate. After completing my basic training I started my officer training in preparation for sitting the reserver officer interview board.
About 12 months into my training I decided that I wanted a change of career and that I wanted to join the Royal Navy full time. With my qualifications and experience I enrolled to be an officer.
To join the navy as an officer you need to attend the Admiralty Interview Board, a two day series of psychometric tests, interviews, group discussions and physical exercises.
When I eventually sat down for my interview with the Personnel Officer she acknowledged the fact that in the discussion exercise I'd got the conclusion I'd wanted and had steered the others to that conclusion but that I could have done it in a more forthright manner.
At the end of the two days I found myself sat before the Commodore in charge of the Interview Board, although he acknowledged that the results of my psychometric tests had been amongst the best he'd ever seen I'd let myself down with the more practical leadership tasks and that I'd not be accepted into the Navy as an officer. It was disappointing as that also meant the end of my time in the Naval Reserve, failing the Admiralty meant that I automatically failed the Reserve version.
It was probably the best decision at the end of the day as I've likely done more through my career outside the navy.

4. I've gone down the bobsled run at Lake Placid
The first project I worked on when I joined my present company was for a customer in Vermont.
In the February I was sent over to the States to work at the customer site for two weeks.
The first weekend I was there everyone seemed to have things planned, either visiting friends or going skiing. As I don't ski and didn't have any friends to visit I was at a loose end. That is until a couple of guys and one of thems girlfriend asked if I wanted to join them on a trip to Lake Placid as it was the last weekend that the bobsled was open and they wanted to go down it.
With nothing else planned I agreed.
The drive to Lake Placid took a little while and I took the chance to enjoy the scenery. When we arrived we had a look around before heading to the bobsled run.
There wasn't a lot of snow so the run was pretty much concrete.
Each run involved two passengers, a driver and and someone to operate the brake.
One of the guys and I decided to go down together and so were issued with helmets and given a safety brief.
The driver climbed in and we got in behind him. The last chap made sure we were ready and then started the sled running before getting in behind us.
Down we went at ever increasing speed, our heads barely centimetres from the concrete. It was scary but also really exciting. All too soon though we had reached the bottom and the sled ground to a halt. We carefully climbed out, handed back the helmets and agreeing it was a brilliant experience made our way to a bridge where we could see the other two from our group come down.

5. I've started writing a book
When my son was ill and had to have a bone marrow transplant we wrote a blog about our experience for our friends and family. Over the past few years I've transcribed the blog into a "book" format. Its something that is only for us, although I've passed it to a few other people that might find it useful to read.
Recently I found myself thinking that our experience might be a good basis for a story, maybe even a novel, so I've started to try and turn it into a proper novel. So far I've got the opening scene. Still a long way to go.

6. I always thought I had two left feet
All the time I was growing up, and for most of my adult life I've avoided dancing. Discos, weddings, parties, if there was dancing involved I'd either hide away or do the bare minimum.
Although there was that incident when I spent most of the night dancing at a work Christmas Party with my arch nemesis who didn't get on with me anymore than I got on with her. A curious situation to be in considering at the end of the evening we sat on the coach heading home snuggled up together and spent my entire leaving do sitting together having discovered that we actually liked each other a lot.
I've avoided dancing because I simply move my feet from side to side and pretty much don't do anything else.
Then I found burlesque and belly dance and my dancing has become a lot more animated and maybe even sexy.
Looks like I've finally found that missing right foot.

7. I still have two of the first books I ever bought myself
When I was in my teens our school handed out leaflets for a company that sold books which you could order and that would be delivered to the school for you to collect. I loved to read and so when I was flicking through the leaflet and discovered some science fiction books I had to order them. Over the years the books have disappeared but recently I was browsing online and discovered one of them for sale. I ordered it and it is now waiting to be reread along with a number of other books. However, these weren't the first books I ever bought.
When I was growing up I discovered the Biggles books. I was hooked from the moment I read the first one. After reading book after book you can imagine my delight when I discovered that W. E. Johns had written a couple of science fiction novels. Kings of Space and its sequel were the first books I remember buying and I still have my copies of them today, over 30 years after I bought them. Its a while since I read them but I have a feeling that they are going to find their way into my reading pile rather soon.


So to the last thing to do. Nominate 15 other bloggers.
Um, Ok, I have a feeling that most of the people that I would nominate may have already been hit by Miss Cassidy. I'm not a great person for nominating people for things like this so rather than naming specific people I'm going to throw it open to anyone reading this post that would like to share 7 facts about themselves on their blog.


In the meantime, normal service will resume shortly as I have a post I want to write thanks to Laura at the Writer's Journey Roadmap and also a belated write up of the Great North Run. Provided I can tear myself away from watching Mr Peabody and Sherman and listening to Kate Bush's 50 Words for Snow, which I've just discovered is over an hour long for the 7 tracks :-) awesome.