The last few weeks have been a bit rough on the training front.
The weather that we've had hasn't helped.
The car breaking down in style has meant that I've not been able to get out to Ham Hill where I'd planned on doing a lot of my track repeats work. Its also meant that I've been having to walk to and from work which eats into my day and the time available to train.
Work has also been a bit hectic so I've not been able to get out for early morning training sessions or evening sessions as I've needed to get work completed.

Last weekend, however, I managed to start to turn that around and went out for a 6 mile training run on the Sunday morning, following that up with a bike ride to the gym with the rest of the family in the afternoon (a bout one and half miles), 50 minutes in the gym and then a 45 minute, very gentle three and a half mile ride back home.

The impressive thing about the afternoon was that my son managed to do all of that, something that at one point he would never have been able to do. Cycling to the gym would have been a real struggle at one point. In fact walking more than a couple of hundred yards would have been impossible. Several years ago we went to London to see a show and he spent the entire time we were wandering around London sitting in a wheelchair being pushed. Considering he had a bone marrow transplant in 2008 he's doing really well to  be able to do that much exercise.

Last weekend I realised that I wouldn't be able to play catch up with the training and so was going to have to rewind my training to a point consistent with a 6 mile long run. With 12 weeks to go I should be able to reach a level that would allow me to put in a good performance on race day.

One week later and work has again got in the way and as I write this I'm sitting on the bed having spent the day at home with a sore throat, on the verge of a runny nose, feeling hot and tired and achy. Its the first time that I've been ill this year, the first time since I started to transition. It was bound to happen but its frustrating that just as I was getting motivated to run again this happens. Well next week is another week.

For those interested this is what my training to date looks like, green is a session that I completed on the day, amber/yellow is a session that was completed but on a different day, red are missed sessions. As you can see things are not going brilliantly. 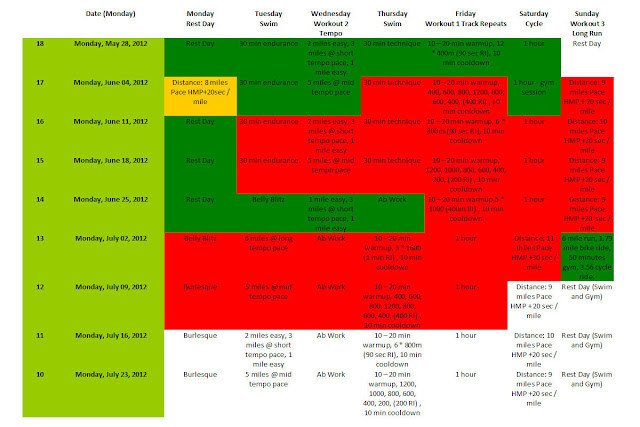 On a plus note I've made some progress towards taking part in the Outlaw long distance triathlon next year. I've got myself a mentor to provide me with training tips and help with my motivation. Its someone from a running forum that I use, who I met briefly when I took part in the Bala Middle distance triathlon a few years ago and who has completed Ironman triathlons and so know what they are talking about. We've talked on the phone and she's made some suggestions already. I look forward to working with her to crossing that finishing line in 12 months time.

Several years ago while training for the London Marathon I was listening to my MP3 player and this track came on. I was having an almost perfect run and this just seemed the perfect track.

Queen - We are the Champions