Is it September already? Where has the time gone. It will soon be that time of the year, beginning with a C, that shall not be mentioned in full until December.

With this being the first Jenna’s Journal I want to just highlight a couple of events that happened during August.

First off, Yeovil Pride. The first Pride event in Yeovil happened in 2019 and coincided with the 50th anniversary of the Stonewall Riots. This was the event that led to the launch of the Gay Rights Movement and the first Pride Marches. Yeovil’s second Pride March happened on the 21st August and saw people from many different places coming together to celebrate being, or having family and friends, who are LGBTQ+. 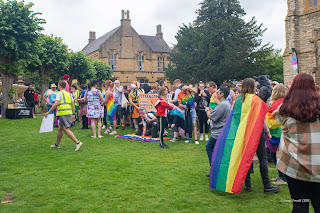 For me, it was amazing seeing so many people coming together, and whether it was true or not, my impression was that there were more youngsters there than adults. Listening to the speeches by two young people I believe that the future for LGBTQ+ people is in safe hands.

The second event happened a week later and saw Yeovil’s community coming together at Yeovil Recreation Ground to celebrate its diversity. There were opportunities to sample food from all over the world, as well as workshops and entertainment putting on by members of the communities. The afternoon ended with everybody dancing in front of the stage where the entertainment had taken place. 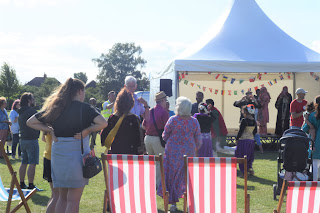 The only downside for me was the sunburn. I always do it, go out, know I should put on the sun cream but think “nope, it will be fine” and then come home looking like a lobster. 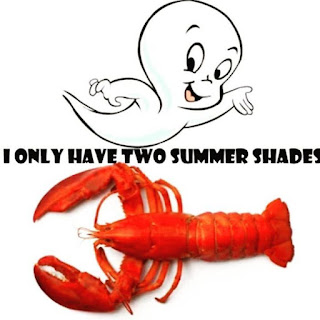 The final event I want to highlight was run by Yeovil Creatives. Yeovil Front Yard Fest took part throughout August, with people from across Yeovil and outside, decorating their front gardens to bring a smile to people’s faces. My own front garden sported a skeleton called Rib, who enjoyed sitting in the middle of a beach scene, and a second called Bones, who spent the month buried in sand.

If you missed any of these events, check out Yeovil Pride, Yeovil Front Yard Fest and Yeovil Together on Facebook, other social media platforms are available.

How Jenna’s Journal is going to develop I don’t know. If anyone has anything that they’d like to see covered, leave a comment.

Next month a friend and I are going to be doing a Fire-walk in aid of MIND in Somerset. I’ll let you know how that goes and what it’s like to walk barefoot over embers burning at over 1,000 degrees.